Winning Magazine is back

By Neeraja Gopalakrishnan in Media News on Monday, 19th September 2022 at 3:50pm

The 160-page quarterly magazine will celebrate all aspects of inspired living as it is set to relaunch following the warm reception from industry and consumers.

John Winning, Publisher & CEO of Winning Group said it is important to create memorable experiences whilst the pace of life has returned to normal.

“I am delighted to share Winning magazine’s return and for this relaunch issue to provide inspiration about who and what is impacting our lives and the moments we make for ourselves. As we rediscover the freedom to move around and connect with others, I hope this issue inspires you to take on new adventures and make your own positive impact, big or small,” Winning said.

To continue reading this article...

By Neeraja Gopalakrishnan in Media News on Friday, 30th September 2022 at 8:00pm

Political reporter Lane Calcutt has announced his departure from the Nine network after 35 years.  Calcutt has shared his departure on Twitter thanking all those who have made his journey “rewarding and enriching”.  Tom Connell, Sky News political reporter congratulated Calcutt for “great innings” “I vividly remember you at a very cold doors at APH one morning. A senator was rambling on and we were all desperate to get inside. You wandered behind the cameras and yelled 'last question!'. And it worked,” he said.
READ THE FULL STORY

By Neeraja Gopalakrishnan in Media News on Friday, 30th September 2022 at 6:41pm

Elizabeth Maidment has started a new position as a social media producer at the SMH and the Age’s Good Food. Prior to that, Maidment was a communications officer at Aussie Broadband and was a freelance food writer and managed social media. Maidment said that she is excited to “start her dream role with one of the leading publications in the food and restaurant industry.”  “I am so ecstatic and honoured (an understatement!) to be starting as the Social Media Producer at Good Food (Nine — Sydney Morning Herald & The Age) in a couple of weeks,” she said.  She has worked as a content creator at Fox+Fleur, editorial assistant at RMIT University, copywriter at Bonbo, copywriter and social media account manager at Word Salad - the communications studio and Content Intern at The Urban List.
READ THE FULL STORY

Fairfax era ends at Nine as Falloon stands down

By Neeraja Gopalakrishnan in Media News on Friday, 30th September 2022 at 3:10pm

Nine deputy chairman and former Fairfax chairman Nick Falloon will step down from the Nine entertainment board, ending the Fairfax era in the boardroom. Falloon replaced Roger Corbett as chairman of Fairfax Media in 2015, while the publisher merged with Nine. Falloon said that Nine and Fairfax had “become integrated so effectively” so he was not recontesting for the board position.  “The time is right for me to step down from the Nine board, four years after the merger between Nine and Fairfax. It has been rewarding to see the benefits of the merger realised and the two businesses become integrated so effectively,” he said in a statement released to the stock exchange on Friday morning,” he said. “I am looking forward to continuing in my role as Chairman of Domain, and contributing to the growth of Nine through that role.” Nine chairman Peter Costello said the company would appoint a new director next year.  “Nick has been a valuable contributor to the Nine boa
READ THE FULL STORY

Tim Bolch and Jess Pantou will join hands to hit radios across Geelong for the drive home on K rock. The pair have almost spent 7 years as breakfast hosts in a variety of markets around Australia, most recently across regional Victoria. K rock content director Tom Lewis said he is excited to welcome the pair to entertain the listeners. “Bringing an exceptional team like Tim and Jess to Geelong is a real coup for both K rock and the town. They’re incredibly accomplished broadcasters and a hell of a lot of fun.” Bolch said his family is excited about the community and settling down at Geelong.  “Jess and I have had nearly 7 years of early mornings together doing breakfast radio, so it might be strange taking over the drive show on K rock, but at the end of the day we are still gonna be having fun making radio together so that’s all that really matters! And if I miss my buddy around breakfast time, I’ll just invite myself over and steal her toast! Problem solved!”, Bo
READ THE FULL STORY

By Neeraja Gopalakrishnan in Media News on Thursday, 29th September 2022 at 4:48pm

Time Out magazine appointed Jade Solomon to the food and drink writer position and promoted Leah Glynn as a branded content editor.  Prior to that, Solomon was a freelance food and beverage writer.  She has also worked as an associate to the Honourable Justice Delany for two years, a lawyer at Arnold Bloch Leibler and a paralegal at Gilbert + Tobin.  Branded content writer Leah Glynn has been promoted to the role of branded content editor after a year.  Glynn was previously a deputy editor at get lost Magazine and Luxury Escapes Travel Magazine, a deputy editor at Emprise Group Holdings and a digital content manager at Bauer Media.  Reach out to Jade with any relevant pitches & media releases at jade.solomon@timeout.com
READ THE FULL STORY

Tonkin joins the Best Of

By Neeraja Gopalakrishnan in Media News on Thursday, 29th September 2022 at 3:05pm

Philippa Tonkin has been appointed as the eCommerce coordinator for news.com.au’s, Best Of.  Tonkin joins the eCommerce vertical from her most recent position as a digital producer at Vogue Australia, Vogue Living and GQ.  She was previously a content producer at Are Medi, across a number of digital brands including Gourmet Traveller, Marie Claire and Better Homes & Gardens, and a digital administrator at Gourmet Traveller.
READ THE FULL STORY 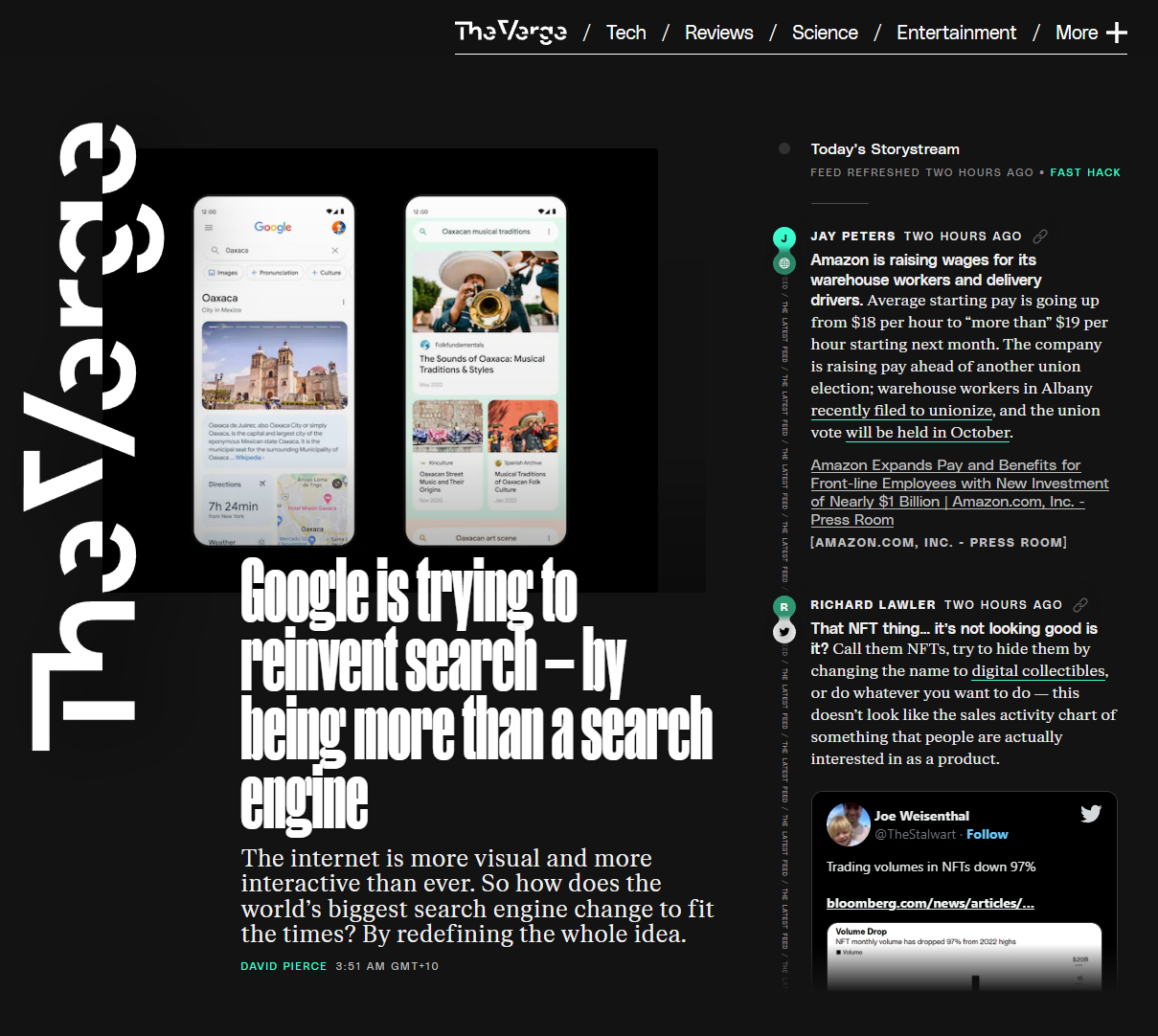 A couple of weeks back, one of the world’s largest tech media sites, The Verge introduced a redesign to its readers. The Verge described it as “radically news” before saying “sometimes you have to blow things up and start over.” It introduced a funky new logo, typeface, colour palette, but the biggest changes were made to its home page where it introduced a ‘Storystream’.  “Our plan is to bring the best of old-school blogging to a modern news feed experience and to have our editors and senior reporters constantly updating the site with the best of tech and science news from around the entire internet.” The Verge claimed its writers could now easily link to a Tweet or Reddit post on the front-page story stream, and that it would free up their newsroom to concentrate on original journalism. Except, readers mostly hated it. Two weeks into the re-design the comment section on the launch story has nearly a thousand comments, and at least 90 per cent of them must b
READ THE FULL STORY

Elizabeth Maidment has started a new position as a social media producer at the SMH and the Age’s Good Food.  ... Show more
Fairfax era ends at Nine as Falloon stands down

Nine deputy chairman and former Fairfax chairman Nick Falloon will step down from the Nine entertainment board, ending the Fairfax era in the boardroom.  ... Show more

Bastion Reputation has announced the appointment of Elliot Giakalis to the role of principal consultant, media and public affairs.  ... Show more