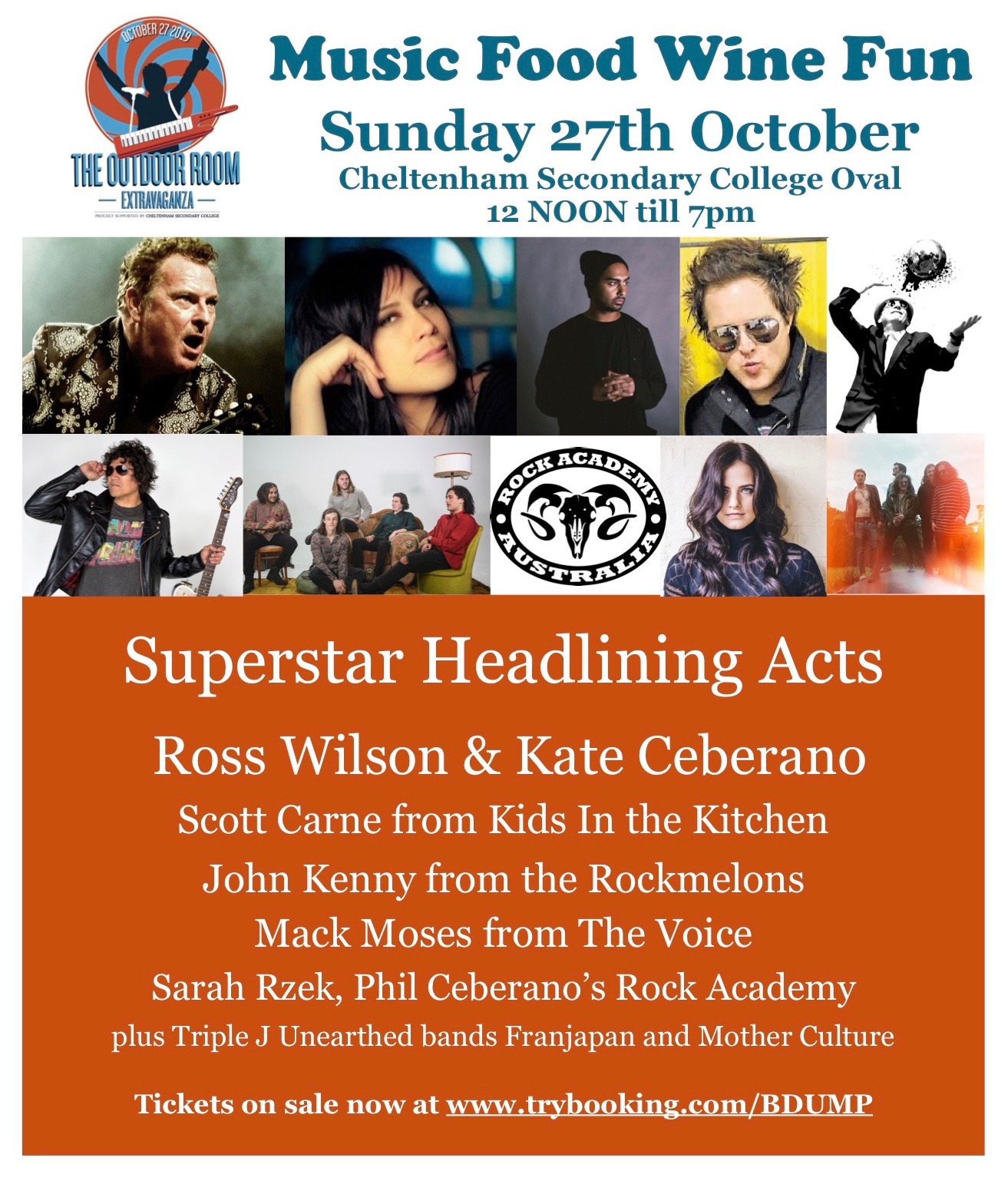 Aussie rock royalty and celebrities join forces to honour the late Paul Gray in fundraiser for kids’ arts and culture hub
The Outdoor Room Extravaganza Sunday 27th October 2019 at Cheltenham Secondary College
Ross Wilson and Kate Ceberano will headline an all-day family event to raise funds for an innovative “outdoor music room/ampitheatre” for the exclusive use of school students and community youth groups to create music and performance art after school hours.
The Outdoor Room Extravaganza will be held on the sports oval at Victorian Bayside’s Cheltenham Secondary College on Sunday, October 27th, featuring music, food, local beer/wine and boutique market stalls from 12 noon until 7pm.
Also performing will be John Kenny (The Rockmelons), Scott Carne (Kids In The Kitchen) and Mack Moses (from The Voice), and young indie artists Franjapan, Sarah Rzek and Mother Culture, with an all-star house band featuring Ben Cripps (Human Nature, David Campbell), Nik Pringadi (Boy George, Tina Arena, Belinda Carlisle), Jeff Consi (The Badloves), Gods of Guitar Phil Ceberano, Steve Williams (Wa Wa Nee) and Christian Meyer.
Tickets range from $25 to $120, with free entry for children under 12 years.
The Outdoor Room is the brainchild of well-known vocalist and Head of Instrumental Music at Cheltenham Secondary College, Lisa Maxwell-Cripps, who collaborated with celebrity gardner Jamie Durie on the concept of creating a kids’ music space to be built as a memorial to the late Paul Gray, of Wa Wa Nee, with the aim of encouraging school-aged children to seek music and the arts as a therapeutic escape from their daily pressures.
Says Lisa, “As Head of Instrumental Music at Cheltenham Secondary College, I have been moved and inspired by witnessing the positive impact that music has on young adults.
“Anxiety and depression are on the rise due to all kinds of modern calamities. The perception of the perfect world on Facebook and Instagram gives confusing messages to young adults and often make them feel like they just aren’t adequate enough. This coupled with the pressures of school work, exams, growing up, hormones, feeling misunderstood, disconnected and trying to look like they have it all together, have contributed to making teenagers anxious about fitting in and hampered the development of coping mechanisms. Suicide is the leading cause of death in young people and affects all socio-economic backgrounds.
“I’ve noticed how students flock to the music department since I arrived here. By   keeping the music department open during recess and lunchtimes, they always have somewhere to go.  But now we are literally running out of space to house everyone and kids are often crammed into the hallways and outside in areas that are cold and uncomfortable. They are bringing all of their friends who love the ‘vibe’ of the music area and just want to be a part of it.
“So because of this, I wanted to create a bigger space where ALL students are welcome. An inviting place for them to take a break from schoolwork, exams and feelings of loneliness. A place to connect with eachother through music, performing arts and culture, whilst improving their mood, concentration and connection to the school. A place where musicians can jam on their instruments during recess and lunch playing all their favourite music for their friends to listen to and enjoy.
“First came the idea of weather proofing an existing outdoor area, but after a conversation with the incredibly vibrant and enthusiastic Jamie Durie, celebrity landscape gardener, the idea of the Outdoor Music Room/Amphitheatre was born.
“We wanted to also honour our dear friend Paul Gray from 80s band Wa Wa Nee and Musical Director to the stars, by building a memorial for him. Paul passed away recently after a long battle with Myeloma.
“All proceeds go towards the building of this project and when completed, the space will also be available to our wider community of young people and youth groups for use after hours. It will be a place for young people to come together through music for generations to come.”

This is going to be an unforgettable day with a line up of Australian Rock Royalty
gracing the Outdoor Room Music Extravaganza stage. Sunday Rocktober 27th is
set to be one of the most exciting and joyful days of music, food, market stalls,
local beer, wine and sunshine! What could be better than that?

Be quick to get your tickets, especially in the VIP area as they are already selling
fast! Arrive at 12 NOON to secure your spot on the oval if you are purchasing General Admission tickets.

John Kenny, Scott Carne and Mack Moses
John Kenny, the supreme soul voice of the Rockmelons, is flying directly from Sydney to perform for a rare one off show. One of the most soulful voices in Australia will be performing the hits; New Groove, Rhymes and What’s it Gonna be. Scott Carne from the multi award winning 80s band, Kids in the Kitchen and the founder of the Absolutely 80s touring show is joining the crew to perform his huge hits Change In Mood and Current Stand. R&B singer Mack Moses from The Voice will also join the mega crew.

Franjapan, Sarah Rzek and Mother Culture
Sarah Rzek is a Mushroom Records recording artist and her single “This Town” is sublime. Triple J Unearthed local bands Franjapan and Mother Culture, featuring the sons of the late Frank Ward from Sydney’s cult band Bellydance, are doing amazing things on the Australian Music scene, releasing music, getting radio play and a lot of attention at their packed out shows. The added bonus for us is that they are ex Cheltenham Secondary students.

Young people and suicide
Suicide is the leading cause of death among young Australians. About 350 young people aged 15–24 take their own lives every year – more than die on the roads. For every youth suicide, there are 100 to 200 more attempts.
People of all ages, races, genders, incomes and family backgrounds commit suicide. But young people are especially at risk.
Having depression or another mental health condition is one of the most common risk factors for suicide. Other things that put young people at risk include:
Young people are protected from attempting suicide if they are resilient and have positive relationships with parents or guardians, close friends and other adults. Helping young people feel safe, supported and part of the community are all important ways to protect them from suicide.
Warning signs
Never ignore the warning signs that a young person may be thinking about suicide. Common warning signs, behaviours and feelings include:
The person might lose interest in their friends or social activities. They may seem to stop caring about other people or events. Their school or work performance might suffer, and they might get into trouble with the police or even run away. They might also have problems sleeping. While it’s important not to ignore these signs, sometimes there is no indication that a person is thinking of suicide.
Message our PR team